Anjumanie Farooqie Azam Trust & Masjid is open for the public 7 days a week 365 days of the year. With a wide range of core services, community programmes, events and initiatives, below are a list of regular services provided by the Masjid.

Children are taught to read the Qur’an with Tajweed and its rules as well as given the necessary Islamic teachings through the very popular Tasheel syllabus.

Currently the evening class runs three classes, 2 boys and 1 girls class. The girls class is taught by a female teacher.

We are able to arrange your marriage contracts on site facilitating your legislative requirements.

The actual marriage ceremony is quite simple. A day is chosen preferably as soon as possible

The prophet (upon him be peace) encouraged that marriages should be announced well, so that the community learns of this communion and do not look at the couple with suspicion when seen together. Therefore, a marriage should not be contracted in secret.

Thereafter, the following should be observed for the actual ceremony:

The best time is a Friday after the ‘Asar prayer in the masjid. The Messenger of Allah (upon him be peace) said, “Announce this marriage, and perform it in the masjid… (Tirmidhi).

The nikah should be performed by a pious person.

Two witnesses should be chosen and present at the gathering. The Messenger of Allah (upon him be peace) said, “There is no marriage without a wali and two upright witnesses… (Ibn Hibban). Although all those present could potentially be witnesses, it is better to have two formal witnesses who sign the marriage contract and can be called upon in the event of any problems.

The marriage payment [dowry or mahr] should be stipulated before hand and the person performing the ceremony should be informed of the amount.

When the bride grants her wali [representative] the permission to marry her to the groom, it is preferable to have two people (from among her mahrams) to witness this also. Although, the representation is valid without witnesses, however, in the event of problems their testimony would be needed to prove that she consented to her marriage to the groom.

The sunna khutba [sermon] will be recited first by the imam performing the marriage. This khutba includes the three verses of taqwa, and a hadith or two about marriage, exhorting the couple and those present to fear Allah and attain taqwa (Abu Dawud, Tirmidhi, Nasai, Ahmad).

After the khutba the imam will ask the representative

(1) if he gives consent to the bride’s (taking her complete name) marriage.

(2) to the groom (again taking the complete name)

(3) for the stipulated amount of marriage payment

(4) in the presence of the two witnesses.

If the representative consents then the imam turns to the groom and ask him if he accepts the bride (taking her name) in his marriage for the stipulated amount of marriage payment. The groom has to reply in complete terms such as, “I accept her in my marriage” or ” I have accepted her in my marriage” or “I do marry her.” It is preferable that he say this and not just “I do” or “I accept.”

Then The imam should then recite the following du’a,

May Allah bless you and have His blessing descend upon you and unite you in goodness.

Thereafter, he will make other du’as for the couple and those present.

It is then sunnah the next day or the day after once the couple have consummated their marriage or entered into privacy together to provide a walima reception. This is provided by the groom and his family and is not a responsibility of the bride. The Messenger of Allah (upon him be peace) provided walima after many of his marriages by feeding the people a goat.

Anas (may Allah be pleased with him) relates that the Messenger of Allah (upon him be peace) provided a walima on the occasion of the consummation of his marriage with Zaynab bint Jahsh. He provided meat and bread to the fill off his guests (Bukhari).

May Allah grant us the ability to simplify what Allah and His Messenger instructed to be simple and grant us blessing in it.

Conditions of the Nikah/Marriage Contract

A marriage contract is valid, according to the Hanafi School, if the following conditions are met:

(1) “Ijab” (propose to marry) and “qubul” (accept to marry) by both parties or their “wali” (guardians). Both “ijab” and “qubul” must be expressed clearly; the term “nikah” or “zawaj” (i.e marriage) must be pronounced during the negotiations of the marriage agreement.

(2) “Ijab” and “qubul” must occur in one meeting. If for example the father of the girl offers her for marriage “ijab” by saying: “I give you my daughter for marriage”, the “qubul” (acceptance of the groom or his guardian) must be pronounced in the same session. In other words, if the groom, or his guardian, responds at a later time, his response does not meet the requirements of the Hanafi; thus the marriage does not occur.

(3) Both “ijab” and “qubul” must be in total agreement on the specifics; if, for example the father of the bride offers her for marriage demanding £100 for “mahr”, the groom agrees to the marriage but does not agree to the amount of “mahr”, then the terms of the contract is not agreed upon, and there is no marriage.

(4) Both “ihab” and “qubul” must be heard clearly by the parties involved in the discussion.

(5) There must be no time limitation for the period of the marriage. A marriage done for a specific period of time is called “mut’ah” (marriage for pleasure only) and is considered illegal in the Hanafi School.

Please contact the Masjid to discuss your needs or e-mail us with your query. 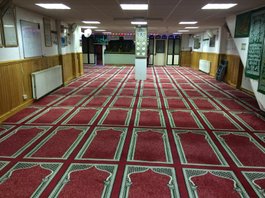